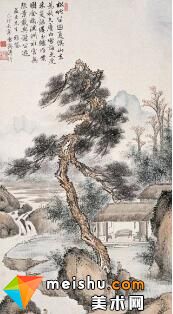 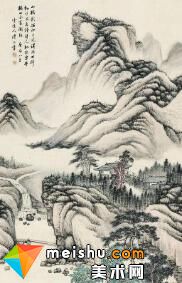 Manchu, the great-grandson of Qing Daoguang's emperor. Its grandfather is emperor 5 child Zha of infante Yi, father straps Zai Ying for shellfish. Childhood is raided for " Bei Zi " , ben Mingpu , date snow fast; Old age agrees for renown date, go with the word, it is commonly used Pu Xuezhai to be a name.
From a child of Mr Xue Zhai learns literary skill, be good at calligraphy brushwork. It is home of famous painting and calligraphy, after revolution of laborious the last of the twelve Earthly Branches, make a living with painting and calligraphy, be in early taught 1930 university art is Yu Furen, allow to teach director holding a department concurrently. Organize " the picture meets Song Feng " , study traditional Chinese painting is artistic, bred large quantities of talents. He is good at drawing landscape, horse, Mo Lan to wait. Calligraphy learns Zuo of Mi Fei, Zhao Meng, an organic whole of Zhao Yu of rice of be in harmony, provide a kind alone careful and precise and cheesy verve. He also is Home Gu Qin at the same time, 40 time ever organized Guqinhui, contact has been been the same as, compare notes musical instrument art, make traditional ancient readily take the opportunity to develops with circulating.
After liberating, he takes an active part in domestic and international culture to communicate an activity. Ever held the post of Beijing article couplet standing director, city is beautiful assist vice-chairman, assistant president of calligraphy research company, painter of reputation of Beijing imperial art academy, thing of city sound assistant manager, committee member of the Chinese People's Political Consultative Conference of the city zone waits for a post east. The member that was hired to be Beijing literary history to study house house 1952. The artistic achievement of his many sided gets the high evaluation of domestic and international personage and admiration.
Congress of artist of the first whole nation is held the fifties, premier Zhou sees Mr Xue Zhai on the meeting, care ground enquires his life and working circumstance, send him to come home with the car personally after the meeting. 1957, beijing China imperial art academy holds water, be hired to be reputation painter. It is important that Premier Zhou established congress to go up in imperial art academy directive. When meeting hind and accept as a souvenir of group photo of the person that all attending the meeting, premier Zhou goes to the side of him to halt, does humor ground say: ? Bully Xu grabs fine long hair of hammer Ju ridgepole? " the literary evening party that once he receives foreign visitor to Huairentang on invitation performs Zou Guqin, act finish, premier Zhou thanks his wonderful performance to tiring-room designedly, congratulate his performance success. Broad old 70 birthday, vice Prime Minister Chen Yi represents the Party Central Committee and the State Council, cabinet of violet light of the Nanhai in asking him to arrive attends luncheon, for his congratulate on sb's birthday. Does he touch the ground to say: to Vice Prime Minister Chen?
The Great Cultural Revolution is medium 1966 by hind of search sb's house and confiscate his property, ran away from home on August 30, do not know whereabouts. When. .