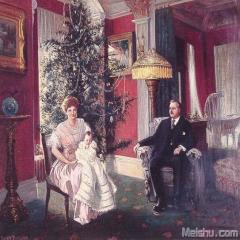 From Wikipedia, the free encyclopedia

Harry Herman Roseland (c.1867—1950) was one of the most notablepainters of the genre painting schoolaround the turn of the 20th century. An American, Roseland was primarily known for paintings centered on poor African-Americans.

Roseland was largely self-taught, and never traveled to Europe to study art, as did many of the American artists of his time. However, he did receive instruction from John Bernard Whittaker and later, James Carroll Beckwith. One of his most popular subjects were his paintings of black women fortune tellers who read the palms and tea leaves of white women clients. These paintings were widely reproduced during the early 20th century in the form of postcard sets and large full-colour prints that were distributed as Sunday supplements in newspapers. While known most for his paintings of African Americans, his work encompassed many genres, including seascapes and portraits. He also gained renown for his paintings of laborers in the coastal areas of New England and New York and his many interior paintings.

Oprah Winfrey has stated that her favorite painting in her personal collection is Roseland's 1904 work, To the Highest Bidder. This painting, which unlike most of Roseland's pieces is actually a pre-Civil War scene, depicts a mother and daughter that are about to be separated by a slave auction.

Roseland won many awards in his lifetime. These include gold medals from the Brooklyn Art Club (1888), the Boston Art Club (1904), and the American Art Society in Philadelphia (1907). Roseland received many other medals and awards as well.