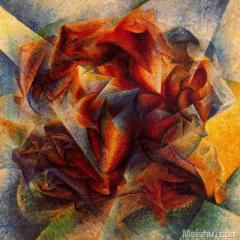 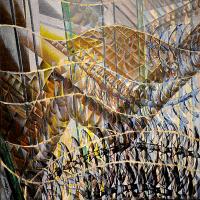 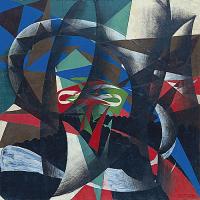 Boccioni wrote a "Futurist Manifesto", published in February 11, 1910, and the majority of the audience in March 3 to the Turin Charala theater announced. In April 11th of the same year, the school issued a manifesto for painting skills". Then one after another appeared some demonstration and declaration. In 1912, the group held their exhibition in Paris (later moved to London and Berlin on display), 1914, Boccioni published a book, they will view the last - form and in fact is the last time, because the same year the outbreak of World War II, the group disbanded. Boccioni, promoters of this movement, in 1916 gradually recovering from injury but unexpected was killed. So the group is not organized. Safri Ni has a period to Cubism, La card by Chirico (Chirico) effect of Metaphysical Painting, and finally returned to the school of realism, Shandong is Solow future music composer (to "bother" (Bruitism) music for apparently not interested in). Painting.
At the end of the establishment of Futurism
At the end of the artist is the performance of the "speed source" and "of" modern life "turmoil" feeling. The movement was led by poet Marley Neti (Marinetti, 1876-1944) and painter (Balla, 1871-1958). In painting, their image is repeated, overlapping, imitating the way the film, in order to express the concept of movement. The important representative is Sai Frisoni (Severini, 1883-1966) and wave (Boccioni, 1882-1916), hybrid. They advocate performance movement. According to their ideas, like Delacroix painted horse looks like no matter how heavy it is running, but also in a moment of rapid photographs. In order to direct the performance of motion, several shape must show moving objects. In addition, only painting cannot be a portrait of people; both of memories, the future is full of hope, therefore, if in a picture not all painted in, can not become a portrait. They do, and to be implemented in art. People tend to cubism and futurism considered similar things, in fact the two completely different stereo. Always send a static posture, decomposition of the object shape. Although there is no time to talk about the wrong opinions futuristic, but not pay attention to this point, the Futurist died only a few years;
The future of the artists is the pursuit of the metaphorical theme and the coexistence of different vision. To do this is through multiple description of moving object overlap to realize; especially emphasizes the object and the environment together, the performance object is disintegrated and displacement, local decentralized control and combination of love and independent logic. In order to make the viewer the center of the painting, the painting must be the comprehensive embodiment of the memory and the vision of the creator. The contribution of futuristic art lies not in the innovation of artistic style and language, its importance is radical and anarchist slogan is infectious and inflammatory, at the beginning of twentieth Century in the western society on the formation of the modern spirit of the great shadow of the ring.