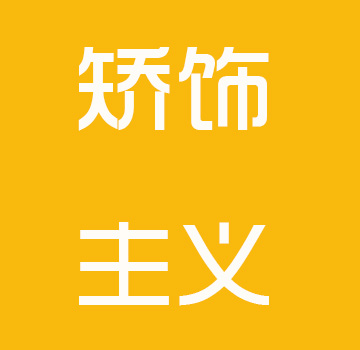 Mannerism. Comes from the Italian Maniera, also translated as the Roman doctrine, style doctrine and mannerism, which means "- style". It is opposed to the rational guidance of painting, emphasizing the artist's inner experience and personal performance, pay attention to the sense of form of artistic creation, the use of oblique lines and curves is more obvious.
The term "style" came to an end before the outbreak of the first World War, which began with the debate among art historians on the artistic title. The German art historian Heinrich Wolfflin (Heinrich Wö lfflin) first used the term to describe Italy in sixteenth Century that cannot be classified in the later works of art, that will be another kind of "style" of the introduction of the French Renaissance style, neither Renaissance or Baroque style. In the view of British art historians, the style of art is very difficult to classify; it has little influence on the art of the mainstream.
But in the historical angle, style a word is often used to describe in the late Renaissance (1550-1580) is a kind of trend, the trend of depicting human and animal by exaggerating the slender form, style, unbalanced posture at the time, in order to produce dramatic and powerful image. Even Michelangelo was once known as a style of Art - in his later works, the appearance of horses and humans was almost out of balance. At the time of the chaotic situation in Italy, the style of art became a kind of art school with the aim of inspiring and piety

The structure of Mannerist painter George Vasari in the engraved frontispiece of the masterpiece "art celebrity biography" of the show, in the English speaking countries known as the "James style" (Jacobean). In this painting, by Michelangelo (Medici tombs) the tombstone effect in anti style characteristics in the top, paper thin frame, with full frame naked dionysus. And the Florence vine pattern decoration frame, similar paper and parchment material is cut, straight and fan type, a screw type decoration (cartoccia), this design looks quite natural, the top of the jar with a lot in fact can not be arranged in the artificial "natural" decorated details so, the whole has become a form of style.
Vasari in this study a frontispiece of the book, by the praise of some of the same type of artist and revealed his own artistic creation of "art": he believed that if you want to draw out good works, the artist must have elegant, rich creativity (invenzione), described by the professional method (maniera) show, wisdom and efforts to complete the work, all standards are emphasizing the artist's wisdom and appreciation of the sponsors. So it is no longer an artisan painter of local, just ready to show a scholar, poet, writer, and sponsors also need to have elegant and profound appreciation. Vasari sponsored by the beauty of the Medici family pattern is depicted in the portrait of a top, as if they are artists in general.

The habit of art style and usually Renaissance instead. This is not because artists are not able to achieve the balance of the Rafael style and immediate appeal to despair to change the style, but because this balance is no longer in line with the atmosphere and the trend of the. Style in two - Julio Romano Rafael's Apprentice (Giulio Romano) and Andrea Del Sarto (Andrea del Sarto) under the development of mature, Andrea Del Sarto studio has produced the standard style painter Pontormo (Pontormo) and Rosso Fiorentino (Rosso Fiorentino).
In the Renaissance, when classical realism on the human body drawing and perspective has reached the pinnacle of the degree, some artists began to deliberately distorted picture of the structure, irrational emotion and art space. Greco is also considered by some to be the Mannerist painter, but Gray admitted in his paintings also express the unique personal characteristics, and is not only a distorted picture design, in his paintings can also feel the "acidic" tone, he portrayed the character very thin and highly distorted, non rational perspective and make people the light asphyxia and crowded composition, make viewers feel hazy and trouble.
Rome, Florence and (Mantua) are the center of the development of style. The people of Venice painting in different "schools" in the development of their unique style, to Titian's painting career as a representative.