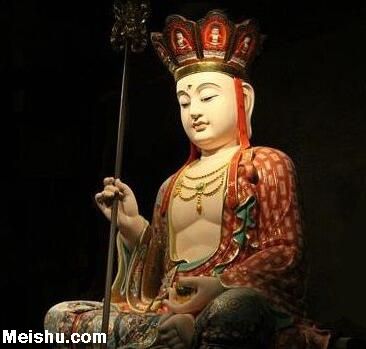 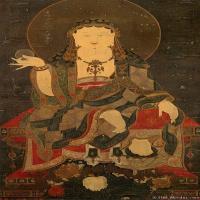 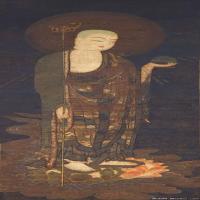 What is called Ksitigarbha Bodhisattva for? According to the "record" set: induction of Sambo Buddha was Rajagaha, Bodhisattva parade countries, educate the masses, to which the Fu Luo mountain, Joe to the home of the elderly. The home of the elderly, the demon takes its essence, the family of five hundred people, and are bored, the 10th to become unconscious. Jizo see this scene, which make read: "real bitter is really painful; there is not such thing. I pity this sentient beings, and relief." This is already said, Teng, to Rajagaha, is said to the Buddha: "buddha! I see Joe home of the elderly more than five hundred people, all by the devil took the essence, bored in, have a few days. I see things, students anukampa heart, students love heart, may the Buddha, I set the relief method of xu. Make the devil to make the yield, random walker driven, the elderly is still complex." The Buddha, from the top of it, shining million search, according to hide.
The Wei said: "today, the popular light Tathagata, according to hide, this Bodhisattva will become law, educate the masses." When Bodhisattva said to the Buddha "I have a mantra, to do the evil spirits, complex drives etc.. I read in the past without a long time there is a Buddha, burn the light king. The death of the Buddha, as in law, I live to ordinary people. There is a fairy, in all of Luoshan, good operation. I see all the ghosts was annoyed, as he is home of the elderly. I was in the affirmation: the case of good knowledge, to study the yield method. The club of Luoshan, their immortal language. The heart of joy, in three days, "I foresee Wan Li, eliminate evil. And all the evil spirits, I called, according to law, taming the mind, make hair heart. At the moment, all hell suffering sentient beings, all take the lotus, the bitter end. The immortal, see me like magic, and I Vyakarana, and as the word: you in the boundless world, Buddha and Vyakarana, called ksitigarbha. In five a day in hell, often when the incarnation, save all living creatures, so that from the disaster, today see elders, as this is. I'm going to this house." Buddha Bodhisattva to listen to Xu, and more than five hundred people, a resurrection.

In the China Buddhist temple, the Bodhisattva image is very characteristic, general Buddha is wearing a crown, wearing clothes and necklace decoration of heaven. But many are bald or Bodhisattva is wearing a crown, wearing robes of the Pilu monk. He is holding a Xizhang, holding a lotus, or holding banners, baozhu. According to the "rituals", "Bodhisattva Jizo ten round" records, because there is no Buddha Bodhisattva in the "five evil world" (i.e., rob turbidity, turbidity, see trouble turbidity, turbidity and turbidity of sentient life) in order to let sentient beings, sentient beings can believe in Buddhism, to show monk Sambo, so the monks are. The Jizo statue also often in a shape of a lion dog (today known as Tibet -- "Tibetan mastiff", head of Damao long, resembling a lion) as the horse, whose name said: "listen" or "good listening". Who funded the main Xingshan min and his son Jin Qiaojue, later with Jin Qiaojue monk, Mount Jiuhua became after two people hid in the dojo, he was also formed the Bodhisattva retinues.
Jizo set to six for all the way of life and death, all great vows, so often appeared in person, day and hell in six, and six in possession of said, its name and image:
(a) Tantric scriptures, "Tantric" is a kind of head, its image for the left hand holding the head, right hand dew India, dedicated to rescue beings in hell.
(two) the orb hidden, left hand holding the right hand knot dew pearl, India, specially delivered a hungry ghost. (three) BAOYING hid, left hand holding the right hand Xizhang, Mani India, special economic animals.
(four) to hide, left hand holding diamond blocks, right hand Shi fearless India, special economy of the asura.
(five) in addition to cover avoidance hid, left hand holding the right hand and let Xizhang, India, as people get rid of better cover avoidance, special economy of humanity. The so-called eight sufferings of that bitter, bitter old, pain, death, hatred, bitter bitter, not bitter, suffer from the separation of five Yin and bitter, were taken by the truth of suffering.
(six) the sun hid, left hand holding Ruyi beads, right hand saying India, as heaven five bad (and death now five signs) and in addition to its special economic distress, of heaven.
According to Buddhism, the Bodhisattva by Fu Shakya Muni Buddha, Sakyamuni Buddha died in the future of Maitreya before birth this period of Buddha in the world, bear the responsibility of educating six people, equivalent to the status of "agent buddha". "Possession of the wish by the" Sakyamuni Buddha said, it is called dizang mahasattvas, permanent jumby leader, make people have those are very recommended this pro, Deng Elysian Fields, hidden by this trust, then in front of the Buddha made great vows: "as zuiku beings in the six paths to establish more convenient, try to free, my own become a buddha." ("Tripitaka - trayastrimsa temple first" supernatural product) so hidden is also known as the "big wish Ksitigarbha", to "mercy", and the goddess of Manjusri, Samantabhadra "great wisdom" and "big" echoes.

Jizo has two salient features: (a) in the dirt. "I learn Buddha, made such great vows, when in the dirt," Bodhi "(see the" ten round "by volume). Great is the Bodhisattva spirit, the more evil to the world more, more is evil beings to more deep degree, Sakyamuni Buddha Buddha is in the dirt, the Bodhisattva vow to learn Buddha Buddha in high wind dirt, showing that he is really inheriting the spirit of buddha. Therefore, the arduous task in the dirt enlightened Shakyamuni Buddha will destroy the degree, to the Ksitigarbha Bodhisattva, nature is very assured. (two) the monk phase: where the Bodhisattva, Bodhisattva is out of the ordinary monks. Unlike other Bodhisattvas, they are basically home now. Such as Avalokiteshvara, is the goddess of mercy, or heaven. The boy is manjusri. Samantabhadra also now. So now the general temple of Buddha statues or pictures, Manjusri, Samantabhadra, Avalokitesvara and mahasthamaprapta Bodhisattva etc., are now wearing the crown head speed, a unity of man. But the monks like Bodhisattva, Bodhisattva according to "rituals", like painting hidden, silent to smell, wearing robes, favouring the right shoulder, left hand holding the right hand lotus, Shi Wuwei, sitting on the lotus taiwan. Or a pennant, left hand holding a lotus, the right hand holding the orb. Why is this Bodhisattva? This is because he decided to work in dirty conditions. The dirty creatures of ignorance, see the evil dark. Jizo in order to "respect all Sambo, believe in Buddhism", it is a phase. The "ten round" said a monk, is building the world clean dirt, so that we can achieve knowledge xunxi, pure in body and mind. For people to move away from evil, the way to escape suffering.