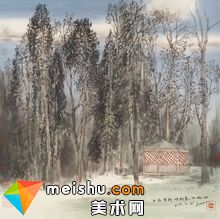 For three years, the creation of traditional Chinese painting "blood pain - Chinese women suffering in the Anti Japanese War" (350cm × 500cm, 2009) was selected into the National Exhibition of major historical works, which was permanently collected by the National Museum. It was awarded the title of top 100 in Chinese painting circle by China Federation of literary and art circles and China Art Association.

In 2018, he created "Trier city in Marx's childhood" (190cm × 500cm2018), participated in the "power of truth - Theme Exhibition commemorating the 200th anniversary of Marx's birth", and was permanently collected by the National Museum.

Yu Wenjiang: pursuing the unity of image and spirit

A tree is a banner. His paintings are often formal and meticulous, but

It also has rich freehand brushwork, creating a tension

Yu Wenjiang's art road is so smooth on the surface that he summed it up in one sentence: "when I was a child, I dreamed of becoming a painter, and I really became a painter when I grew up." However, in order to find a suitable artistic style and painting language, Yu Wenjiang has a place in the art world, but he has gone through arduous efforts and unremitting exploration.

Yu Wenjiang was born in 1963 in Yantai, Shandong Province. He was fond of fine arts since he was a child. At the age of 17, he was admitted to the Art Department of Shandong Normal University. In 1984, his graduation creation "little partner" became the only student work selected in the six national art exhibitions and won the excellent work award. At that time, his paintings were mainly pure and meticulous. "I realized in college that modeling language marks a painter's level of understanding of the spiritual realm of characters," he recalled. I ask myself not only to describe the phenomenon in the picture, but also to portray more diverse meanings of the image through the phenomenon. "

After graduating from University, Yu Wenjiang went to work in Shandong Art Museum. During the period when he just became a full-time painter, he was deeply confused. He realized that the traditional Chinese fine brushwork painting was no longer suitable for the aesthetic needs of the contemporary people in terms of formal language. Therefore, how to find the position of Chinese painting in the contemporary and international world, how to go out of the tradition and form his own artistic style became a problem that he had to think about.

In order to find the answer to the question, Yu Wenjiang spends a lot of time every day, according to the context of the development history of Chinese painting, making a detailed study on the historical evolution of painting techniques and expression language. While studying fine brushwork, he also made a systematic copy of Wu Changshuo's flower and bird paintings, Ren Bonian's freehand figure paintings, Shi Tao's landscape paintings and Shi Xi's landscape paintings, gradually deepening the understanding of freehand brushwork of Chinese painting, and realizing that "freehand brushwork is the spiritual connotation of Chinese painting, and fine brushwork painting also has rich freehand brushwork". In 1988, Yu Wenjiang entered the Central Academy of fine arts for further study, and further developed his ability to master the modeling and painting language. After 1990, Yu Wenjiang's creation entered a new stage. In "Mengshan autumn" (1992) and "homeland" (1993), he initially tried to introduce the factors of flower and bird painting and landscape painting into the figure painting and achieved success, breaking the long-standing conceptualization and stylization of the fine brushwork field. In "Liaozhai series" (1993) and "old dream series" (1994), no matter what the picture shows is ancient characters or modern life, he tries to pay attention to the artistic conception expression of meticulous painting in the painting aesthetic thought, combining the realm beauty of painting with the form beauty, the richness and freehand brushwork of painting.

In the hard work, Yu Wenjiang gradually established his own style paradigm. He called his brushwork "small brushwork", which is characterized by freehand brushwork, hard work and hard work, as well as real and virtual brushwork. It not only contains the preciseness of brushwork and modeling, but also does not lag behind the rigid rules for the sake of the surrounding of brushwork. It can be seen everywhere that freehand brushwork is loose and elegant, but does not fall into arbitrary and reckless actions for the sake of willful sufficiency. All of the paintings are reasonable and meticulous. His works have won many awards in the national art exhibition and Chinese contemporary fine brushwork exhibition, and become a dazzling new star in Chinese figure painting.

Painting is the art of shaping the soul

"Art needs to be expressed through skill, but art is not skill." Looking back on his own way of artistic exploration, Yu Wenjiang concluded: "no matter how the history develops and how the society changes, emotion and spirit are people's living conditions and life styles. In "grassland Pastoral" (2004), "what we saw in Egypt" (2005), "snow mother and son" (2007), "migration" (2010), "going home" (2011), as well as the giant Chinese painting "blood pain -- Chinese women suffering in the Anti Japanese War", which took three years to create for China's major historical projects, the picture shows more broad and comfortable artistic temperament, and the brushstroke is free From the formal structure, color concept to image building, we strive to reach a new height in richness, massiveness and perfection.

Yu Wenjiang said that there are two main things for painters to consider in their whole life: one is what to draw, and the other is how to draw. The former is the subject matter, and the latter is the language of painting, but in the final analysis, they are all the pursuit of the unity of image and spirit. "Art creation is, after all, the emotional expression that life gives to our spiritual world," he said. The real source of the image world is the deep expression demand from the spiritual field. "

Painters don't care too much about the market

At present, Yu Wenjiang is the vice president of the Chinese Painting Academy of the National Academy of painting and a national first-class artist. At the same time, he is also the honorary president of Ningxia painting academy, the vice president of the modern fine brush painting academy of the Ministry of culture, the executive director of the Chinese contemporary fine brush painting society, the researcher of the Chinese Painting Academy of the Chinese Academy of art, the member of the Chinese Art Association, and the tutor of Yu Wenjiang studio. But in his heart, he is always the first painter. Up to now, Yu Wenjiang still insists on spending most of his time in painting and research every day. He especially likes to paint in the dead of night. He often draws until one or two in the morning and gets up after 90 in the morning. This is a habit he has developed for many years. Although in the contemporary development of art, all artists inevitably have to face the art market, Yu Wenjiang believes that painters should not care too much about the market, but should concentrate on their own works. "A really good painter, with superb brush and ink skills and deep skills outside painting, will naturally be recognized and accepted by the market, and can stand the test of time and the scrutiny of history; on the contrary, if the painting is not good, even if it wins the market for a short time, it is also a false market, and will eventually be abandoned by the market."

"The painter's vocation is first to pour his aesthetic ideal into his works with rich artistic expression means. As a painter, we should be responsible for ourselves, and also for the collectors who really like your works. All works handed over from you, no matter they are for competition, sale or gift to friends, should try our best to draw well. " Yu Wenjiang said: "from a historical point of view, the essence of art market and collection lies in its respect, recognition and inheritance of spiritual products of an era, a country and a generation, as well as its preservation and accumulation of human spiritual history. At present, the Chinese art market is still in the early stage of development, but it is the happiest time for Chinese painters since ancient times. In the new knowledge field of vision and the background of the times, I hope I can create fine art worthy of this great era in the future. "