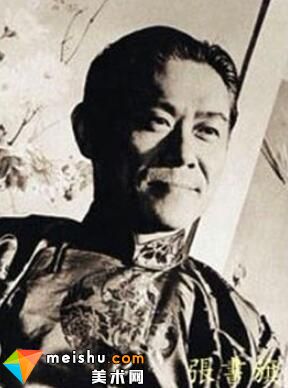 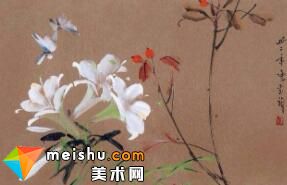 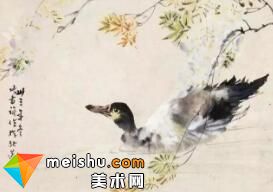 Zhang Shuqi (1900 - 1957), formerly known as Shi Zhong, Zi Shu Qi, Hao Xiao Zhuang, and seven oju. The name is Komatsu villa. People from Pujiang, Zhejiang. He was a professor at Centre College in Nanjing. During the war of resistance against Japan, he went to the United States to set up a painting academy, lecturing and painting and settling in San Francisco.

Zhang Shuqi is diligent in sketching, working in colors, especially in making good use of flour, dyeing on the antique Xuan paper, dyed with white powder, whitening as black, ingenious in technique, and vivid in style. The painting style is elegant and unique, and the three people of Liu Zigu and Jin are called Jinling three heroes. His works have been collected by the President of the United States. It was adopted by Ren Bonian as a flower and bird who likes to use white powder to mix color and ink. The picture is elegant and beautiful, which has a modern sense. He was taught by Gao Jianfu and Lu Fengzi to form a fresh and elegant painting style featuring both color, chalk and ink. Published in the "Book Flag Flower Bird Collection", "Zhang Shuqi Painting Collection" and so on.

The works have the features of Japanese painting; they like to paint with paper, and strive for the integration of color and ink. The outstanding representative of the Academy School, known as "Ren Bonian No. 2", is good at using powder and can "divide the powder into five colors", known as "the painter of powderism". Lv Fengzi praised him as "painting flowers smells like fragrance, painting birds like words, excellent skills, no contemporary rivals." We call it "self possession, vigorous and vigorous, free from the pen, eager to compete with the ancients, and become one of the contemporary writers." At that time, he and Liu Zigu had the title of "Jinling Sanjie" (Jin Lingsan painter).

At the age of twenty-six, he graduated from the Lv Fengzi college. Teaching in Xiamen Jimei normal school.

In 1929, he was appointed by Xu Beihong as professor of Art Department of Centre College, Nanjing.

He settled in the United States in March 1949. Professor Tam Ren.

And Pan Tianshou and Zhu Wenyun formed a "White Society" to discuss the art of painting. In the painting world, the reputation is growing. He is good at flowers and birds. He writes about mountains and rivers, animals and characters. Ren Bonian, diligent in sketching, color design, especially good use of powder, known as "powderist painter", in the dyeing paper with powder random dot dyeing, very vivid. Its works have been exhibited in France, Germany, the former Soviet Union, Belgium and many other countries. He died of illness in the United States in 1957, when the People's Daily published an article calling him a patriotic painter. It is published in "Book flag flower and bird collection", "Ling Mao Ji", "Zhang Shuqi's collection of paintings", "Chinese style painting" and so on.