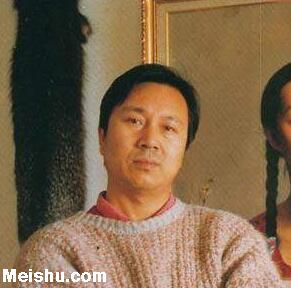 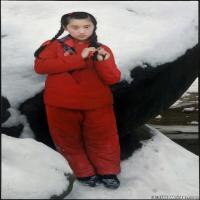 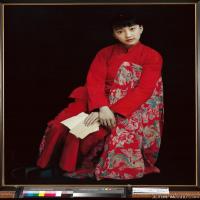 Wang Yidong, May 1955 born in Shandong on eleven 1968 in Penglai County, Shandong Linyi first middle school in Shandong in 1970, when Turner Yiyuan diesel engine factory, in the factory performance team performance, drawing in the promotional picture, performance team stage background, the Department of Fine Arts in December 1972 admitted to the Shandong School of art, began to study painting system. 1978 admitted to the oil painting department of China Central Academy of Fine Arts. During the study successively went to Shandong, Hebei, Chengde, Xinjiang fishing island in Yili, Jilin Yanbian, Shandong Mengyin, Feixian County, Yishui, Yiyuan, Yinan and other places sketching folk songs. Had participated in the "France Tenth World Art Festival", Japan's "Sixth Asian Art Exhibition", and in the Sixth National Art Exhibition of the exhibition of works of "peasant" mother won the excellent prize (Beijing Artists Association). 1982 graduated from the China Central Academy of Fine Arts and taught there. A former professor of the Central Academy of fine arts.
Wang Yidong, the current professional painter of Beijing painting academy, national artist. Beijing painting art committee, director of China Artists Association, member of Oil Painting Committee of Chinese Artists Association, vice chairman of Beijing artists association. He also held a solo exhibition in the United States, Hongkong, Macao, Germany and other countries, the award-winning works in the national art exhibition.
Wang Yidong of the classical master techniques of eclectic, integrate traditional culture Chinese art language, the basic skills and works of painting interest together, to contrast with the penetration of several main gold, white, black and red, the picture setting heavy but not dull, strong and stiff artistic effect. With a subtle and touching inner beauty. Wang Yidong's painting to show the static dynamic, sway in the stable scenery, from the color of their connotation, it is like a vintage, filled with European Renaissance art style of mellow aftertaste, meticulous in Song Dynasty China rhyme flow fragrance.

Wang Yidong is one of the most powerful oil painting artists in China today. He easily the aesthetic implication of exquisite technique of Western classical painting and Chinese culture into one, the successful reproduction of its own unique artistic style. His works are fine lines modelling style, form and structure) accurate and good at the inner world of rich and complex characters, with dignified simplicity and pretty clever artistic charm P.
Wang Yidong was born in simple folk, picturesque mountains and Lunan village. The landscape of hometown gives him the artistic temperament with rich local flavor and profound spiritual connotation. His works deeply reflects the land of his beloved.
From the 1984 "history department students" began the portrait series shows a more pure classical style, at the same time the work has a common basic goal: to find the national characteristics. The characters in the background, create a China ladies flying type situation; in those background simple works, the coordination of the national realistic skills and style often make the audience ignore a fact that Wang Yidong in the art of the realistic painting style: beyond nineteenth Century. Painters began to worship more early masters. "Joint", "Liu Ershu", "iron eggs" shape and light thanks to Rafael, Rembrandt's art, this type of reference to the picture of a throwback to the spiritual transcendence skills are. Wang Yidong with the exquisite technique of classical oil painting to return to the local theme, the initial attempt is careful, in this stage, in the choice of the image of the eccentric appearance of preference for the appearance of the people in the. The snow still maintain a portrait of the characters, but the image based on the real space reach become rich and vibrant. The picture of Wang Yidong in "more on the specific shape of the contrast to speak, to other focus, resulting in the overall layout more emphasis on color painter; while Wang Yidong tries on a very realistic picture found in very abstract feeling, this abstraction is not a general sense of simple and abstract, nor is it purely in order to stimulate the human senses, but to serve the whole screen to convey a feeling or emotion. So the works, pure black, white color and neutral brown tones constitute the purity of art, but also to the work cast a bitter mood.

- Zhu Naizheng (famous painter)
After 1983, Wang Yidong went on a road of classical painting, a bold theme, to seek a more perfect art form, created a large number of portraits, still lifes and human. Wang Yidong's portrait in this period tries to show the style, psychology and consciousness of modern people in the form of classicism. The picture is light and soft, delicate strokes, to abandon the excess level, trying to make the plane decoration method of classical painting method and Chinese phase method, especially some portraits of the night, absorbed the traditional painting meticulous decoration, fusion and the characters of temperament, revealing the Oriental style inner beauty, gentle. [1]
- Liao Wen (art critic)
Cheng Yuan (associate professor at the Tsinghua University School of Architecture): Wang Yidong's portrait of a distant song, singing on the simplicity of the ancient culture of Chinese poetic nostalgia and longing. I am Wang Yidong has two aspects: one is a success, and pay for the selected enterprise loyalty; two is hard after the Epiphany and fun.
Zhang Yusheng (Beijing blue flute design company general manager): his painting pursuit of perfection, color is very pure very bright, do very particular, in place.
Li Na Song Feifei (painter): Wang Yidong's works with the aesthetic tendency of realism, he seemed to express their hearts a quiet, eternal ideal for farmers' image.
Li Jingzhe (brigade Australian scholars): Wang Yidong in real life often can not find the north, speak things will not circle...... But I know that when he is alone on the canvas, he has a very calm and free, it is his emotional moments.
Li Lu micro (painter, Wang Yidong's wife): Wang Yidong was born a painting.